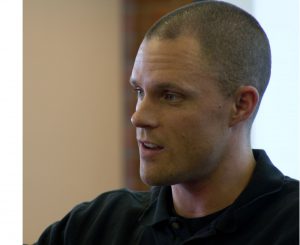 Brady West is the winner of the 2011-2012 Charles Cannell Fund in Survey Methodology.

If the word “driven” were given human form, it might look a lot like Brady West—a lean 32-year-old with a buzz haircut and a long angular face anxious to get the next thing done…get someone helped…get to the point.

Last October, in just a little over three years, West got his PhD from the Michigan Program in Survey Methodology. Along the way, West worked three quarters time as a graduate student research assistant and a consultant at a campus center for statistical consultation and research. He oversaw the work of more than 50 deacons at Ann Arbor’s First Presbyterian Church. He devised new ranking methods that could improve how college football and basketball teams are selected for their championship games. He published several papers in peer reviewed journals. He traveled with his wife. And he played competitive basketball with former high school buddies from Livonia.

“I don’t waste time during the day,” West says. “Every single minute of the day I have to have something I’m working on and taking care of or I feel like I’m not being productive.” Brady West dunks the ball on a cruise ship to the Caribbean last year with his wife’s family. Photo courtesy of Brady West.

That drive was apparent in West’s ambitious dissertation on non-response adjustment. When conducting surveys, researchers want to make sure that non-respondents, those who choose not to participate, aren’t different in important ways from those who do, thus biasing the results. By collecting interviewer observations of relevant details at all households, researchers are able to draw some conclusions about the families that decide not to take part, and to adjust their estimates accordingly. For example, when interviewers for ISR’s National Survey of Family Growth (NSFG) do face-to-face screening interviews, they record whether they think the person they talked to is in a sexually active relationship, based on selected details such as whether a member of the opposite sex was present during the interview. (Government agencies use NSFG’s rich pool of data on family life to plan health services and programs and to study families, fertility, and health.)

But West wondered how accurate those observations were. “That just troubled me from the first day I heard about this,” West says. “Aren’t those guesses? Aren’t those judgments? What if they’re actually not sexually active? Aren’t your predictions and your estimates all going to be wrong?”

West concluded that the answer to that last question was yes. For his dissertation, he showed that if interviewer observations are incorrect, the adjustments based on them lower the quality of survey estimates. “I’m doing some research now to try to find at what point, in terms of reduced quality, it doesn’t make sense to use the observations for adjustment.” He also used completed surveys to produce a list of variables that most accurately predict respondent reports of sexual activity; interviewers now have a list of those ten predictors posted on their laptops. “Things like was there a kid present in the house, did the person say they were in a relationship, are they older—not rocket science,” West says. The checklist, he notes, has reduced the number of false positive judgments, the main failing of previous observations. West and wife Laura on a trip to Portland wine country in 2010. Photo courtesy of Brady West.

In late October, immediately after his dissertation defense, West flew to Germany for two weeks to complete a related research project. Then he joined the program he had just graduated from as an assistant research professor; West had received several offers, but Michigan’s couldn’t be matched. “A personality flaw, if you will, is I always feel like I let people down if I don’t do a good enough job for them,” Brady says. “Seeing that kind of offer added to my motivation to do as high quality work as possible to show them they made the right decision.”

Here’s betting they did.