To Russia, for data 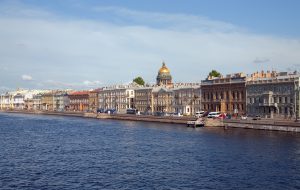 ISR political scientist Ronald Inglehart was among the winners of an international grant competition from the Russian Federation’s Ministry of Education and Science, designed to attract leading scientists from around the world to Russian educational institutions. Winning scientists partner with specific Russian educational institutions, helping to build Russian capacity as well as facilitate international research partnerships.

Inglehart’s project—the only social science project among the 40 winners— involves setting up a new laboratory for comparative social analysis at the Higher School of Economics in St. Petersburg, Russia. As part of the grant, 20 young social scientists from Russia will come to Ann Arbor to attend summer workshops in 2011 and 2012, and Inglehart will spend the fall terms of those years in St. Petersburg.

Eventually, Inglehart hopes that other U-M faculty and students will also have the opportunity to study and conduct research in St. Petersburg and Moscow. In addition, the Russian Ministry of Education and Science will fund surveys in Russia and several other former Soviet countries for the 6th wave of the World Values Survey, which Inglehart directs.

“This is an extremely important project because it helps establish close working relationships between scientists in Russian and Western universities that will be stimulating for both sides. If it succeeds, it will facilitate regular exchanges of scientists and students between Russia and the U.S. and many other Western countries,” says Inglehart.